Function: Competes with CD28 for CD80/86 ligands on APC surfaces, sequesters them from CD28 molecules. Activates protein phosphatases (SHP2 and PP2A) which acts on the CD3zeta chains and Akt respectively. This regulates the scale of early stages of T cell activation of the immune response, the TCR must be engaged (it needs immunogenicity). It is upregulated starting at 1 hour post T cell activation with maximal upregulation 2-3 days later. Half life is 2 hours.

Location: This molecule is intracellular until T cell activation, when it is phosphorylated and moves to the cell surface. If phosphorylated it cannot bind to AP-2, which serves to remove it from the surface. It is found on CD4+ and CD8+ T cells. Constitutive expression on Tregs. FoxP3 is a TF for CTLA4 transcription. 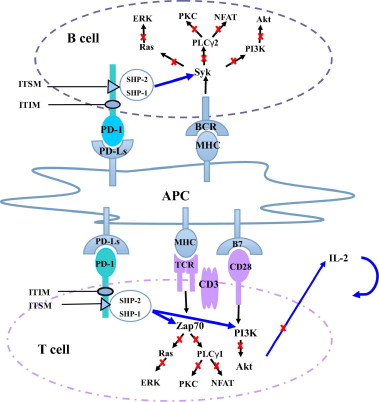 Function: Contains a ITIM receptor, aims to limit T cell activity in peripheral tissues, limiting the response and autoimmunity. Binds to PD-L1, constitutively expressed on most cells, and PD-L2, expressed on APCs during inflammation. Activated receptor inhibits kinases of T cell activation via SHP2, a phosphatase, that acts on CD3ztea and thus affects Zap70 activation (zeta chain associated protein kinase 70) in T cells and Igalpha/beta and Syk in B cells.

Impact: Regulates activity of T cells in tissues and tumors. Knock out mice show autoimmunity with elevated serum IgG2B and IgA, these occur later in life and are less prominent than CTLA-4 KO mice.

Function: Binds to ICOSLG (B7RP1, B7 protein family) on APCs.

B and T Lymphocyte Attenuator (CD272)

Location: Expressed on activated B and T cells. Expression induced during T cell activation. Expressed on Th1 not Th2.

Loss of both LAG3 and PD-1 lead to multiorgan lymphocytic infiltration and death in the animal.

Theme by Anders Noren — Up ↑